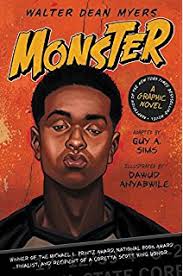 This past week, I decided to read two different versions of the same novel, Monster by Walter Dean Myers. My reasoning behind reading the novel and then the graphic novel was twofold; first I wanted to read the novel itself and secondly, I had never read a graphic novel so I wanted to see what the differences were.

Monster is a novel that follows the trial of a sixteen year old African American boy named Steve Harmon. Steve is accused of helping to rob a drug store and in the midst of the robbery, the owner is shot and killed. The story is told by Steve Harmon, who writes about his trial as a movie screenplay. On trial are two of the four accused robbers; Steve and James King. The other two accomplices Richard “Bobo” Evans and Osvaldo Cruz, have entered plea deals in exchange for their testimony. Throughout the story, Steve flashes back to times in his school’s film club and the discussions he had with his teacher. The majority of the book follows the trial and we find that the title “Monster” is derived from the prosecutor Sandra Petrocelli, who describes the accused as “monsters”. Steve maintains his innocence throughout the trial telling the jury that he hardly knows the others involved. In the end, we find that James King is found guilty and Steve is found innocent. But even though he is found innocent, when he goes to hug his lawyer, Kathy O’Brien, she pulls away. This brings to question if Miss O’Brien ever saw Steve as himself or if she also saw him only as a “monster”.

I really enjoyed the novel and especially the format in which it was written. It was an extremely quick read as a movie screenplay, and it allowed you to really visualize everything as it was happening. I think this book would be an excellent book for anyone to read but especially youths who may be headed down a wrong direction. It shows how choices can affect your life and the consequences of those choices. It also is very revealing that even though you may not be guilty, people’s perception of you can change from even being accused; as Steve found out from his dad, who basically was never able to see Steve as the same boy he was before the incident.

View all posts by Holly Nolte